The majority of Libor adjustable-rate mortgage-backed securities could have interest payment shortfalls or principal losses because weak documentation will dictate that the underlying loans remain fixed at the last published rate, according to Moody’s.

Of the 2,719 RMBS deals rated by Moody’s that use Libor as an index, 59% could freeze at the last published rate because of the way the securitization’s documentation is structured.

In most of the cases, the party responsible for making the determination is the trustee or securities administrator. However, Moody’s said, the deal documents present them with “a waterfall of unfeasible options for identifying a Libor [alternative], such as polling banks to obtain a rate. The final course of action directs deals to fall back to the last available Libor, which would fix the rate after 2021. Such a rate could be very low given the current interest rate environment.” 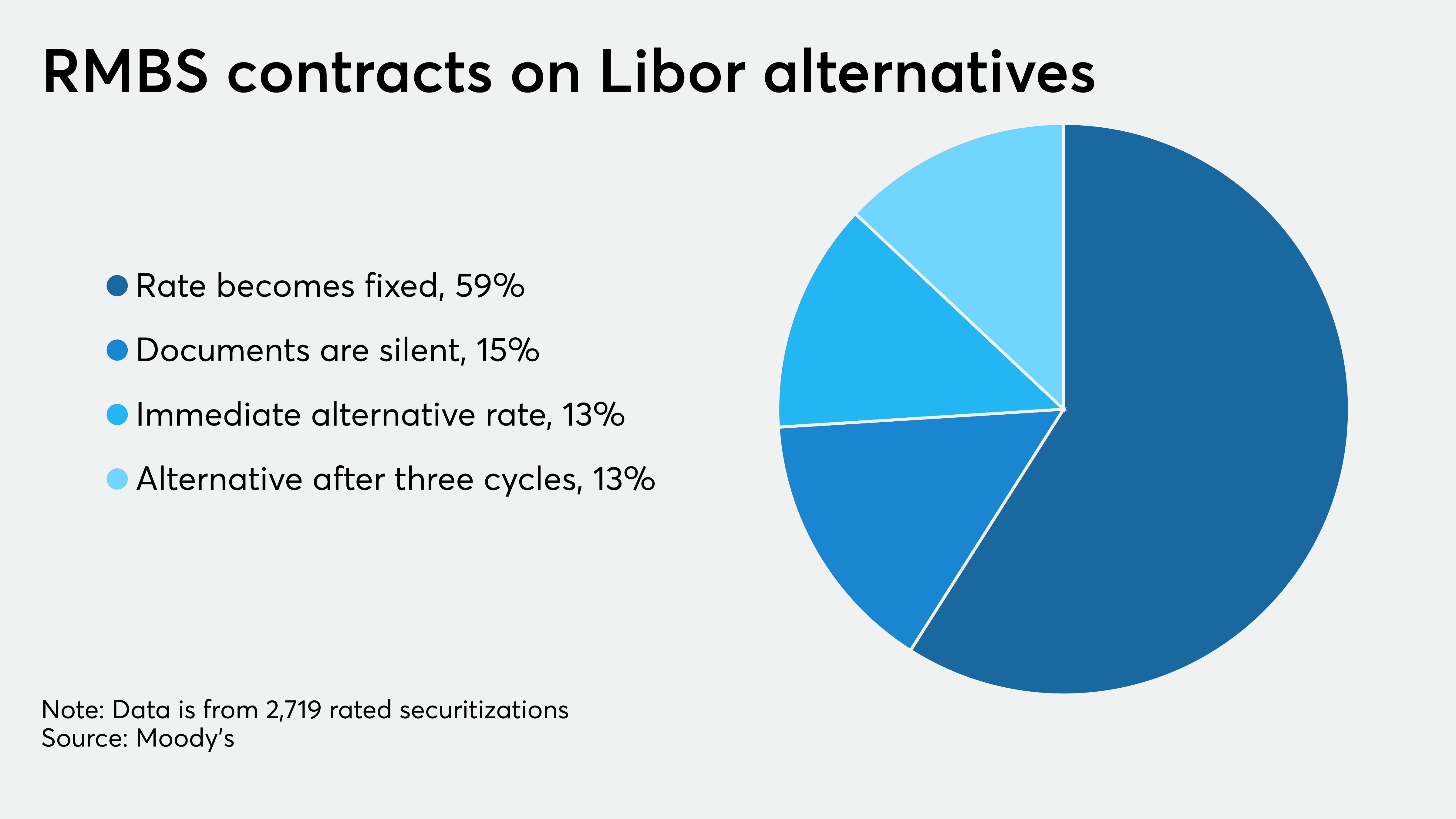 Those interest shortfalls or principal writedowns are likely in deals without net weighted average coupon caps. The caps prevent a bond’s coupon from exceeding the net WAC of the assets.

“However, interest rate mismatches would build excess spread for deals when the bond WAC is lower than the asset net WAC, a positive for bondholders,” the Moody’s report said. “This increase in excess spread would help build credit enhancement by paying down bonds and providing a cushion to protect against collateral losses.”

Another 15% of the Moody’s-rated deals are silent regarding the availability of Libor. As in the above transactions, in nearly all of the cases the trustee or administrator would be responsible for determining Libor.

Moody’s said in these instances, the trustee or administrator is likely to petition a court for guidance. But it also offered a couple of other scenarios: a deal party may attempt to amend the documentation to designate an alternative rate after gaining bondholders’ approval or the bonds could convert to fixed rate once Libor expires.

“If deal parties require court guidance, funds will be in escrow until a court is available, creating a payment disruption and trust expenses,” Moody’s said. “Furthermore, calculations are at risk of revision and depend on the court’s trust instruction proceeding outcome and ultimate benchmark replacement.

“Alternatively, if a deal party attempts to amend the documentation, gaining approval from the requisite percentage of certificate holders, especially if the share is a supermajority or 100%, is unlikely to succeed. In such cases, the deal party would likely then seek court guidance, exposing transactions to potential payment delays and trust expenses.”

The remaining deals have contract terms that call for the trustee or securities administrator to choose an alternative to Libor, either immediately or following three distribution cycles after publication ceases.

“However, documents often lack guidance about how such parties should choose an alternative index and spread adjustments, if any, to make such a choice comparable to Libor,” the report noted “Additionally, as the party responsible to pick an alternative index differs between the bonds and the assets, there is a possibility that they may not be able to coordinate on the choice of replacement. Furthermore, documents omit details about any spread adjustment required to make the choice comparable to Libor.”

Transactions closed in 2018 or later generally have less exposure than older deals because they contain provisions to implement a Libor replacement, Moody’s said.

The work of the Alternative Reference Rates Committee, including its choice of the Structured Overnight Funding Rate as its preferred replacement for Libor can help to mitigate or even eliminate the transition risk.

But because implementation of the ARRC’s recommendations is voluntary, deals will remain exposed to transition risk.

There are other options, Moody’s noted. For example, legacy RMBS contracts that omit language that provides for an alternative rate are vulnerable to indirect risks, such as increased operational costs and litigation from parties who are looking to protect their own interests.

“For these contracts, providing clarity by strengthening the fallback language through court, legislation or amendments would help mitigate cash flow and indirect risks,” Moody’s said.

Small banks have complained SOFR doesn’t work for their needs and have proposed using another Libor alternative in the marketplace, Ameribor, published by the American Financial Exchange.

Separately, on Sept. 10, the ARRC issued a request for proposal seeking a potential administrator to publish forward-looking SOFR term rates.

The proposed SOFR term rate maturities should include one-month and three-month rates, and may include six-month or one-year rates as considered feasible.

“We are pleased to launch this RFP process,” Tom Wipf, ARRC chairman and vice chairman of institutional securities at Morgan Stanley, said in a press release. “This is a necessary step in the ARRC’s assessment as to whether it will recommend a term SOFR rate and in ensuring that any recommended rate can be produced in a timely manner.”