The Consumer Financial Protection Bureau has pulled its previous guidance regarding whether marketing services agreements comply with anti-kickback rules.

In a frequently asked questions post, the CFPB stated that these agreements do not violate Section 8 of the Real Estate Settlement Procedures Act.

While the FAQ does not change much on a practical level, it represents a change in attitude by the bureau from when it was headed by Richard Cordray. His CFPB never declared MSAs to be illegal but had expressed some level of hostility towards them.

On Sept. 11, the Mortgage Bankers Association, along with the American Land Title Association, the National Association of Realtors, the National Association of Home Builders and the Real Estate Service Providers Council sent a letter to CFPB Director Kathy Kraninger asking that a 2015 Cordray bulletin on the topic be withdrawn and replaced “with a reassertion that the real estate industry should follow long established best practices under RESPA and associated case law.” 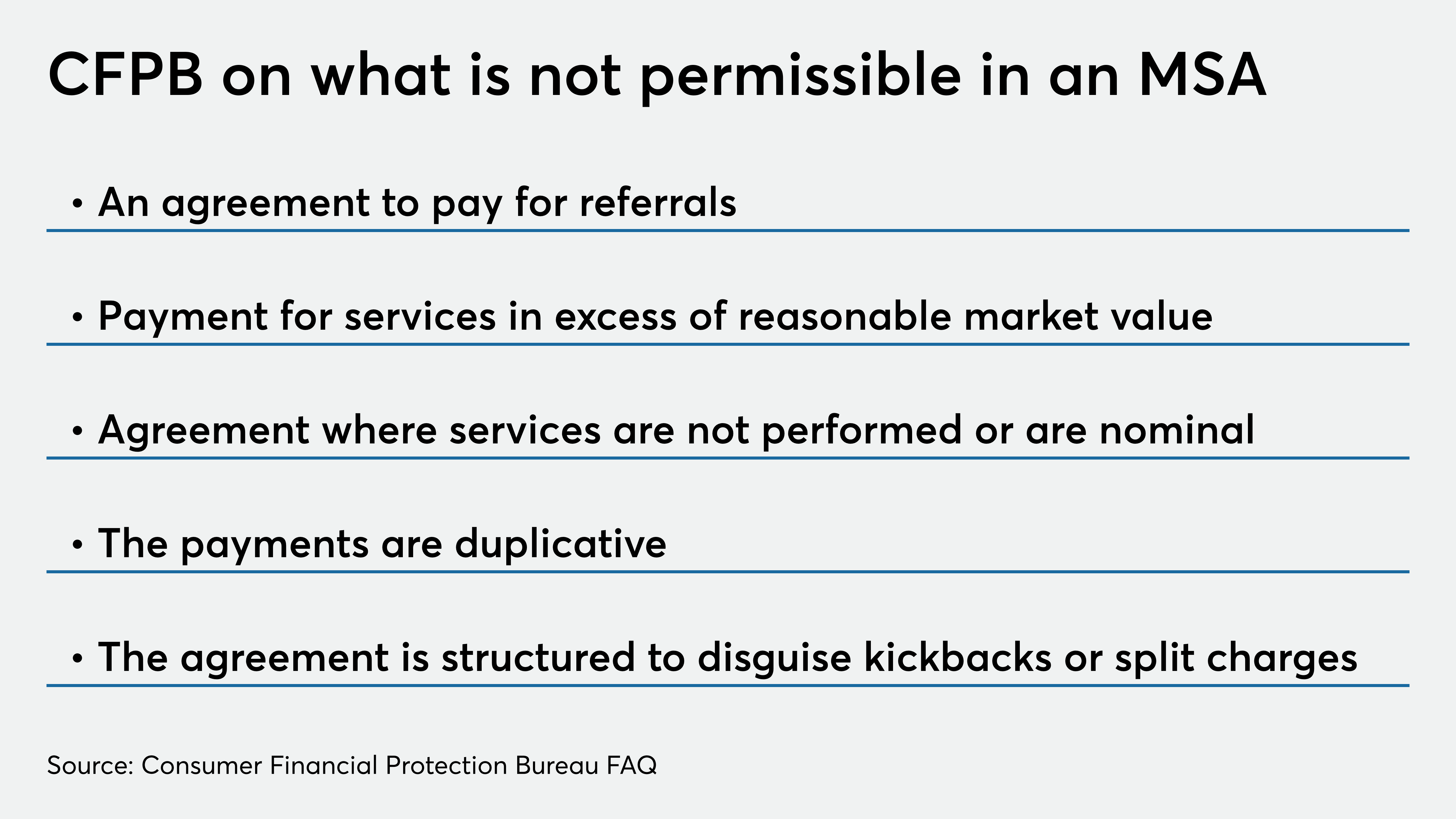 It was the latest of several efforts undertaken over the past few years to get the bureau to change its position on MSAs, said Justin Wiseman, the MBA’s associate vice president and regulatory council.

“Eliminating that 2015 bulletin was the best thing that came out of this, even if nothing changed on a practical level,” said Mitch Kider, the chairman and managing partner of Weiner Brodsky Kider, who represented PHH Mortgage in a major challenge to the CFPB’s authority on MSA compliance. That bulletin, he said, was not based on the law itself and deviated from a 2010 Department of Housing and Urban Development interpretation on MSAs.

“It is very helpful to the industry and gives them a clear message of what the issues are surrounding Section 8 and how to, at least preliminarily, analyze some of those issues,” Kider said of CFPB’s recent post.

More importantly, “no new law is being made with these FAQs,” he added.

Those who are looking to form MSA arrangements are now “probably relieved to not have to try and discern how to structure a compliant MSA under the 2015 bulletin,” Wiseman said.

That bulletin was not a compliance guide that lenders could use, but “a statement of concerns … only some of which actually involved MSAs,” said Holly Spencer Bunting, a partner with Mayer Brown law firm.

“Now we have in place FAQ guidance that lays out the exceptions to RESPA as it relates to MSAs, and it is consistent with the PHH decision,” she continued.

After the bureau issued its 2015 bulletin, the mortgage industry complained about not having clear guidelines on what was permissible. Many alleged the bureau was creating regulation through enforcement.

Most lenders ended any MSAs they had following the initial ruling by then-CFPB Director Cordray to fine PHH $109 million for an alleged violation.

PHH’s case was one of several that challenged the constitutionality of the CFPB’s structure; although after winning an appeal on procedural grounds, PHH declined to seek Supreme Court review. Even so, then-acting CFPB Director Mick Mulvaney dropped the matter saying PHH did not violate RESPA.

This new guidance is consistent with how the mortgage industry has been operating following the PHH case, Bunting said.

“It’s nice to have affirmative guidance from the agency, because a lot of the guidance that folks we’re relying on was still from HUD,” she said, referring to the 2010 interpretation. “But it doesn’t ultimately change how folks are going to go about compliance.”

The CFPB’s FAQ stands to impact many beyond mortgage lenders. Other players like title insurers and real estate brokers, even home warranty providers, have all come under CFPB scrutiny for MSA compliance.

“This move highlights that title and settlement professionals need to be on their toes when analyzing marketing services agreements,” said ALTA CEO Diane Tomb in a statement. “Section 8 of RESPA can be confusing and lacks clarity. We appreciate the bureau’s effort to produce compliance materials to help the industry work through these issues with specific fact patterns.”

A statement from NAR said the group “has long advocated for clarity on MSAs and appreciates the bureau’s recognition of the importance of RESPA enforcement to enhance relationships among settlement service providers.”

In a blog post accompanying the FAQ, the CFPB warned it will still go after violators and promised vigorous enforcement.

“The bureau is very clear that they will enforce the rules as they have been understood prior to the bulletin,” Wiseman said, adding that RESPA’s statutory language does allow for MSAs under certain regulatory contexts.

“The devil really is in the details when it comes to MSAs,” Bunting said. “The FAQs provide good guideposts but it’s still not the level of detail that one must scrutinize an MSA with to make sure it’s fully compliant.”

There was another subtle difference in the CFPB’s FAQ. Past guidance stated that MSAs were permissible between two business entities but not between an entity and some participants. The new FAQ used as one of its complaint examples an MSA between a lender and an individual real estate agent, notes Marx Sterbcow, a Louisiana-based mortgage industry compliance attorney.

“This kind of opens up Pandora’s Box, because now they’re insinuating in their example that individual real estate agents can enter into MSAs with lenders,” he said. But the bureau’s statement on enforcement indicating that arrangements between lenders and agents or teams of agents are still dangerous was important.

However, that doesn’t alleviate Sterbcow’s worry that some might use that example to push the envelope and enter into agreements with agents.

Sterbcow, who is representing Townstone Financial against accusations of redlining by the CFPB, added that the statement on enforcement was a positive because the Bureau had not pursued many, if any, Section 8 kickback cases in the last few years. However, in Rocket Cos.’ prospectus, it revealed a RESPA investigation into its Rocket Homes unit.

Depending on who wins the upcoming election, Section 8 interpretation, compliance and enforcement could shift again, especially in light of the Supreme Court ruling earlier this year that invalidated the single-director structure for the CFPB as written in the Dodd-Frank Act.

As a result, a change in the White House is likely to lead to a new CFPB director being appointed, one with views similar to Cordray’s. And because FAQs are informal, they could be easily revised.

“Compliance needs to be at the highest levels at this point because of the election,” Sterbcow said. If both the White House and the Senate shift control, the bureau is likely to broaden its enforcement efforts in all areas, not just MSAs. 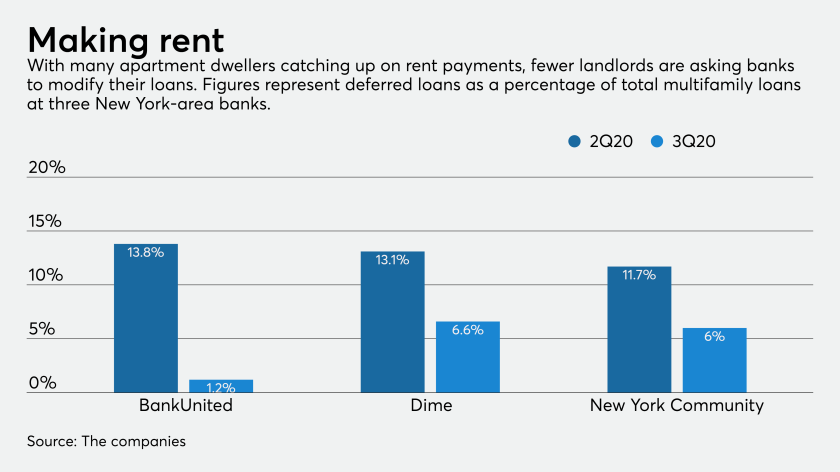 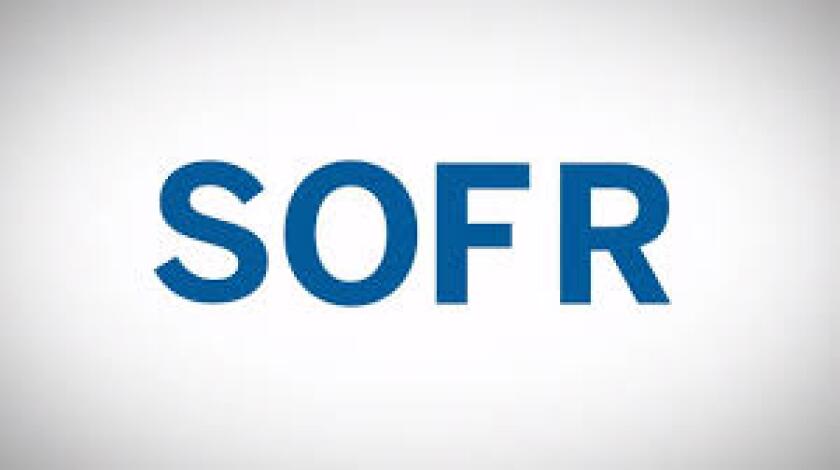