Shannon King, a single mother, left the Bay Area a decade ago as housing costs soared, hoping to find an affordable place to live in southern Oregon.

For a time, King and her children were homeless. Then, they moved into a small travel trailer in Phoenix, a working-class community of 4,500 about 35 miles north of the California border. Six years ago, a neighbor heading into a nursing home gave them her double-wide 1965 mobile home, with three bedrooms. The rent: $600 a month, including utilities.

King, 37, a grocery store clerk, planted a garden outside where her three children played with the children of neighbors, including a taco truck owner and migrants who worked nearby fields and orchards. Like many in the park, King didn’t have insurance.

Last week, wildfires destroyed it all: The trailer, the Bel Air Mobile Home Park and about 2,500 trailers, apartments and homes in Phoenix and neighboring Talent. King, who is white, recalled pausing as she fled to urge Latino neighbors in broken “high school Spanish” to leave immediately.

“Now I’m back at square one,” King said Thursday as she stood at an evacuee donation center outside the local Home Depot with signs in English and Spanish.

In the wake of wildfires that have ravaged Oregon this month, leaving at least eight people dead and nearly a million acres burned, California transplants who went north seeking affordable housing now find themselves victims of an exodus that has driven up housing costs in states that are burning: Oregon, Idaho and Washington. 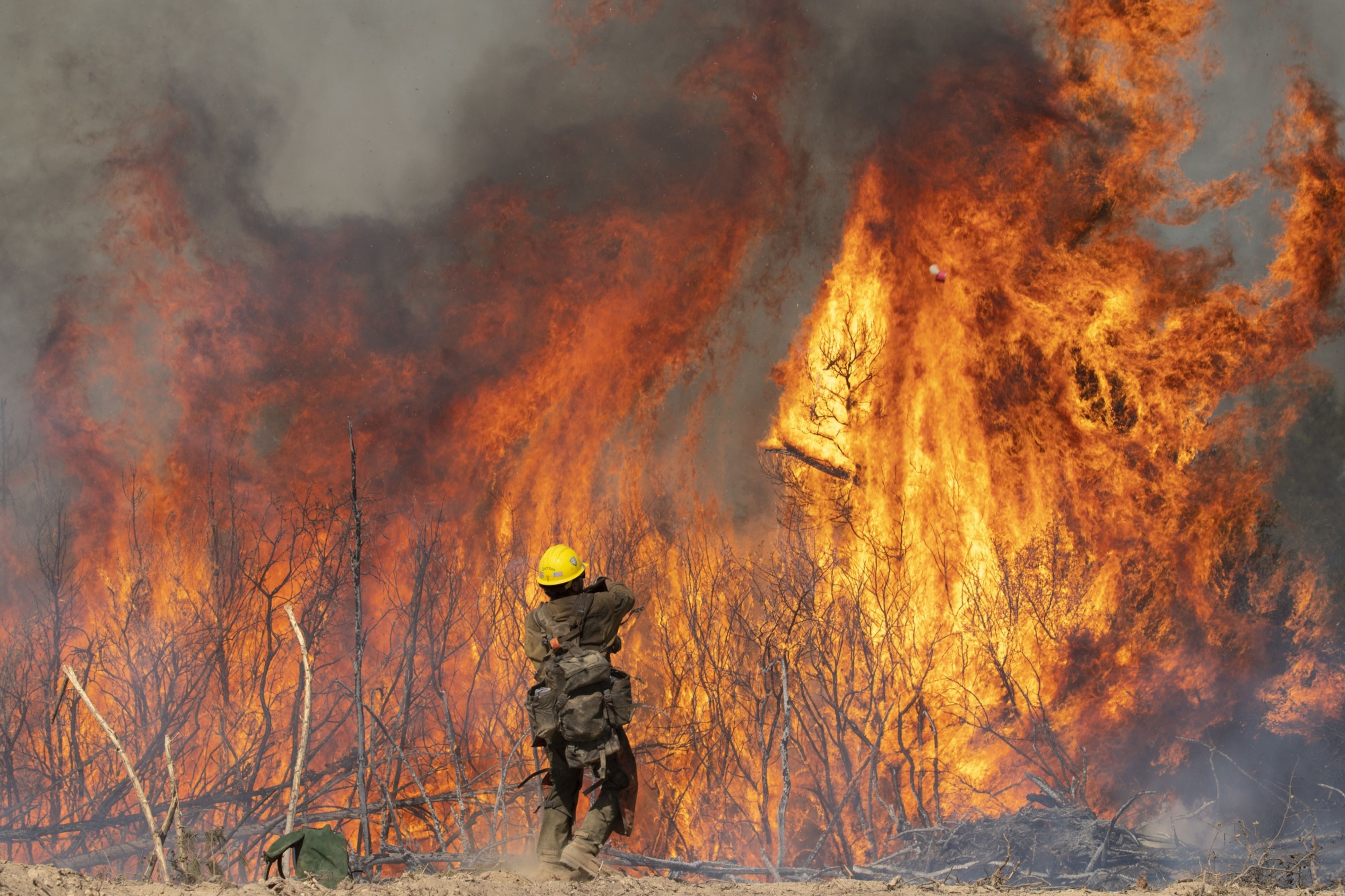 In Oregon, about 40,000 people initially evacuated and thousands were still at emergency shelters or hotels on Friday. As fire officials assessed damages, they said it wasn’t clear how many would be permanently displaced. Median rent has increased more than 14% statewide in recent years, and wages have not kept pace. In Talent, a community of 6,500, 1 in 3 residents spent more than half their income on housing. Last year, Oregon lawmakers enacted the first statewide rent control measure in the country, but affordable rentals remained scarce: The area has one of the lowest rental vacancy rates in the country, less than 2%, rivaling Los Angeles and New York.

In the Rogue Valley surrounding Talent and Phoenix, where homeless shelters were crowded before the wildfires, homeless camps are growing in local parks.

On Friday, King was considering pitching a tent in one of the camps, so that she could at least reunite with her children. She and her youngest, 7-year-old Cheyenne, were staying with friends; Kayleigh, 15, and Jordan, 13, were with her ex-husband in nearby Medford.

“I don’t have a home,” Cheyenne said as she flitted from coloring books to helping volunteers break down boxes. “I love LOL dolls. But I don’t have any of them anymore.”

Her mother was working extra shifts and nights at the grocery, filled with fellow fire victims. She’s not supposed to talk about the fires at work, she said, but “I look in their eyes and I want to say, ‘Me too.’ ” One night, she held a spontaneous prayer circle with some evacuees at the grocery’s checkout.

King was hoping to earn enough to afford new permanent housing so she and Cheyenne could reunite with her two other children.

“As a mother, I want to give them something of a home. I feel like such a failure. Every day I relive my evacuation, feeling that sense of panic and trying to have a clear head so I make the right decisions,” she said.

She hadn’t yet been allowed back to salvage what she can from the mobile home park, which authorities have considered too hazardous to venture into. She fears Phoenix officials will focus on redeveloping areas with more expensive housing and will not allow a half-dozen burned mobile home parks to rebuild. She appreciated that while the agricultural town, like the surrounding valley, was mostly white, it was also 20% Latino.

“I don’t want to see my community exterminated to make way for economic progress,” King said. “That community gave me a life.”

About 50% of students in the Phoenix-Talent school district are Latino. At one school, Orchard Hills Elementary, 80% of students lost their homes, said Megan Ridgeway, the school librarian who was coordinating the Home Depot donation center this week, serving about a hundred families a day. She said teachers created the donation center to help families, including immigrants in the country illegally who were afraid to seek help at the local expo center shelter staffed by National Guard soldiers.

“There was already a housing crisis in this area. That’s my biggest fear: We are not going to get our people back,” Ridgeway said.

Felix Reyes brought his family to the donation center in the Home Depot parking lot to pick up masks, diapers, food and other supplies after their mobile home burned in Talent. Reyes, 52, a handyman, said he had come to the valley a decade earlier with his wife and eldest daughter, now 13, from Mexico. His two younger sons, ages 1 and 4, were U.S. citizens, but Reyes worried that because of his immigration background, if they sought government help at emergency shelters, the family would be deported. They were staying with relatives in Ashland, sharing a bedroom.

Phoenix is about 20% Latino, a working-class enclave on the outskirts of Ashland, which has become a gentrified mecca for Californians, many of them retirees. Stuart Warren, a Phoenix city council member who helped start the donation center with other local volunteers, said some local officials had been trying to expand affordable housing before the wildfires.

Now they face the added challenge that many sites were so contaminated by the fires’ toxic residue that they can’t be rebuilt quickly enough for residents to wait. He hoped to find other sites to rebuild, like a grassy lot across from the Home Depot, where evacuees could set up trailers if they are provided by the Federal Emergency Management Agency, whose staff arrived in the area last week.

Phoenix Mayor Chris Luz said FEMA officials had not yet told him whether they will offer trailers. More than 2,000 burned homes in the area also needed to be assessed for safety by environmental officials, he said. Luz is not sure that the area near the hardware store is the right place for any trailers.

“Phoenix is pretty well developed, so where do you put that?” he said.

Phoenix City Councilor Sarah Westover, who works with the Rogue Action Center, a community organization whose headquarters was destroyed by the fire, said officials needed to ensure the sites of burned mobile home parks are not bought and rezoned for more expensive developments and instead are set aside for low-income residents who disproportionately lost homes in the fires.

“It’s like this fire went after the poorest and most vulnerable people in our community,” said Westover, who grew up in federal housing in Ashland before moving to Phoenix. “If we want people to stay, we have to take action now to make sure there’s transitional housing… We can’t put our tax base above the needs of the people who live here.”

In Talent, residents returned to sift through leveled mobile home parks and apartment complexes sprayed red with fire retardant, the air still acrid and smoky. Jeffrey Ochoa, a Long Beach native, was managing a mobile home park spared by the fire where he said tenants still needed help with work and bills.

“If you need anything, call this number,” Ochoa, 39, told a passing tenant in Spanish as he handed out leaflets for emergency aid.

Across the street, Mike Toohey was retrieving the burnt remnants of his computer from the ashes of his apartment complex, escorted by a police officer.

Toohey, 73, a retired U.S. Air Force veteran, had lived in the Rogue Valley for a decade, but said he would have to leave Talent to stay with his sister in Ashland.

“The rental market was very tight in the valley and this will only exacerbate it,” he said.

Jesus Siordia, a Phoenix city utility worker, moved to the area from Lynwood; his wife from Carson. They settled 12 years ago in a trailer at Talent Mobile Estates with a fenced yard for their kids. They added a husky, Jackson; a trampoline, a swing set and a barbecue.

The wildfire wiped out all but a handful of trailers in the park.

The Siordia family fled with Jackson, their children ages 2, 6, 11 and 13 and the clothes on their backs. They stayed first with relatives — 11 people in a three-bedroom home — then received a voucher for a single hotel room with two beds. Siordia’s brother and his three children, also displaced by the fire, were staying in the room next door.

At the mention of moving to larger nearby communities like White City, Siordia’s wife, Maritza, 31, grimaced. She wants to stay in Talent, where she moved with her parents when she was 2 years old and grew up attending the same schools her children do now — with some of the same teachers. Plus, her husband — who moved to nearby Medford when he was 13 years old — is often on call and needs to be within 20 minutes of Phoenix.

The cost for starting up in a local apartment is about $4,000 — including first and last months’ rent and deposit — and most that are available don’t even have yards.

“To put them in an apartment, it’s going to be like here,” he said, gesturing around their cramped hotel room.

Siordia was exploring home loans, but the housing market was tight, with nothing available to buy under $200,000. Everywhere they looked for assistance finding rentals or other housing had a waiting list.

“There’s so many people looking,” he said.