Banks criticized for requiring balloon payments on loans in forbearance 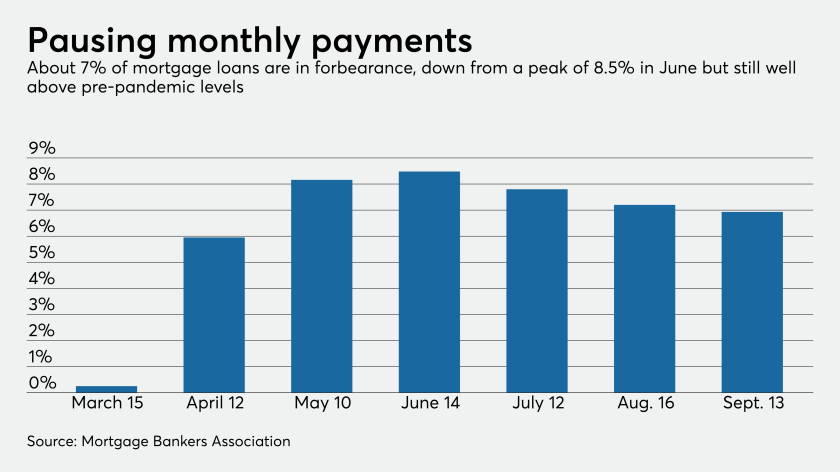 Big banks that have been offering mortgage relief to homeowners during the pandemic are facing fresh criticism over the rules they are enforcing when borrowers are supposed to resume making their monthly payments.

A report published Tuesday found that banks are handling the question of how borrowers should compensate for their missed payments in myriad ways. Some homeowners are having those payments tacked onto the end of their loan terms, while others are being offered loan modifications, and still others are being told that they owe the money in an upfront lump-sum payment that may be unaffordable.

The outcome can depend on a dizzying array of factors, including whether the mortgage is backed by the U.S. government, which options that bank offers, whether the borrower is aware of all of those choices, and the borrower’s financial wherewithal.

“With millions of Americans at risk of losing the roof over their heads during a pandemic, it’s unconscionable that big banks are seemingly taking advantage,” Nick Weiner, organizing co-director of the Committee for Better Banks, which wrote the report, said in a press release. He argued that some arrangements may be financially risky for borrowers.

The Committee for Better Banks’ report includes the recommendation that banks should offer all affected customers the option of extending the term of the loan instead of making a balloon payment at the end of the forbearance period.

The economic stimulus law passed by Congress in March required servicers of government-backed mortgages to grant payment deferrals to homeowners who have been affected by the pandemic and request relief. But the Coronavirus Aid, Relief and Economic Security Act is silent about what should happen at the end of the forbearance period, which is often 180 days.

The percentage of U.S. mortgages in forbearance spiked from 0.25% in March to 8.5% in June, and has since fallen to 6.9%, according to the most recent available data from the Mortgage Bankers Association.

At a congressional hearing in July, the president of the Housing Policy Council, an industry group, noted that there is not a one-size-fits-all solution for borrowers transitioning out of the forbearance period. House Democrats have passed legislation that includes mandatory post-forbearance repayment options, but that bill has not gotten a Senate vote.

The new report by the union-backed Committee for Better Banks sheds light on some of the situations that struggling homeowners may encounter when their forbearance periods end.

Weiner said in an interview that the group decided to write the report after some customer service representatives at banks raised concerns about scripts that allowed them to make offers based on the questions that consumers asked.

He argued that banks’ communications with cash-strapped homeowners are often not as clear as they should be, and said better employee training would help.

Borrowers with mortgages backed by Fannie Mae, Freddie Mac, the Federal Housing Administration or another government agency cannot be required to make lump-sum payments at the end of a forbearance period, said Alys Cohen, an attorney at the National Consumer Law Center.

But, she added, “The communication has been bad enough that many homeowners still believe that there is a lump sum.”

Specific banks that were cited by the Committee for Better Banks defended the actions they have taken to assist borrowers during the COVID-19 pandemic.

“Our employees have been trained on the policies enacted in the CARES Act and are available to educate borrowers on their options during this challenging time,” Ryan Bailey, executive vice president at the $100 billion-asset Bank of the West, said in an email.

The San Francisco-based bank, a unit of the French banking giant BNP Paribas, says on its website that it considers several options when the forbearance period is over, and that they may include a lump-sum payment, a repayment plan over a set period of time or a loan modification.

A Bank of America spokesperson said the Charlotte, N.C.-based company works with more than 200,000 homeowners to assist them with deferrals, and stated that there are no balloon payment requirements.

BofA’s website provides a more nuanced picture. It states that options for borrowers who have more than one payment due on their loans may include paying back the postponed payments at the end of the forbearance period. The same is true for mortgages that are owned by other entities but serviced by the $2.2 trillion-asset Bank of America.

HSBC states on its website that it may reinstate the past-due payments in one lump sum at the end of the forbearance period. The bank’s website also says: “Because most customers cannot afford an immediate repayment, we also have options for making up the missed payments over time.”

Julia Gordon, president of the National Community Stabilization Trust, which works to facilitate the transfer of foreclosed properties from financial institutions to non-profit organizations, said the picture is particularly murky for homeowners whose mortgages are not backed by the U.S. government.

“All the servicers are facing a public awareness and messaging challenge right now,” she said. “This is complicated stuff. There’s a lot of rumors and misinformation out there.”