41% of consumers forecast that home prices will rise over 2021

With rising prices negatively affecting their view of the market, fewer Americans said it was a good time to purchase a house in September compared with the previous month and in September of last year, Fannie Mae said.

Even so, the company’s monthly Home Purchase Sentiment Index rose to 81 for September, a gain of 3.5 points over 77.5 for the previous month, because other factors were higher; more participants felt it was time to sell and a larger share noted confidence about job security.

Compared with September 2019, the HPSI was down by 10.5 points from 91.5, showing that sentiment is still recovering from the depths reached in March and April because of the coronavirus outbreak. 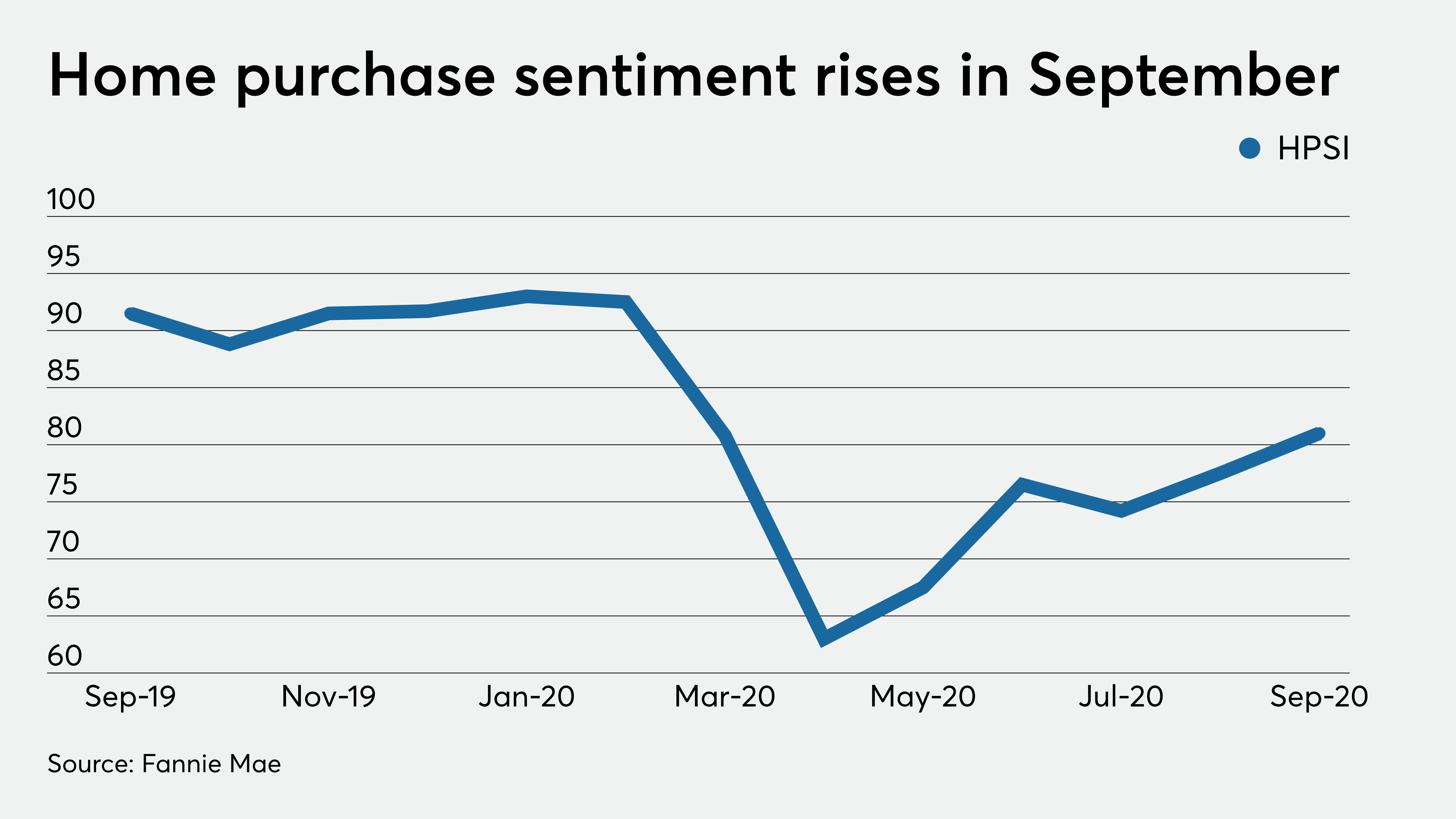 “The HPSI has recovered more than half of the early pandemic-period decline, mirroring the strong home purchase activity of the past few months,” Doug Duncan, Fannie Mae senior vice president and chief economist, said in a press release. “Consumers’ home price expectations were up strongly this month, with high home prices playing an increasingly — though unsurprisingly — important role in driving both the increase in ‘good time to sell’ sentiment and the decline in ‘good time to buy’ sentiment.”

The gap between those consumers that said it was a good time versus a bad time to buy narrowed six percentage points in September compared with August.

In the September survey, 41% of the respondents said home prices will rise over the next 12 months, with 34% responding that they will stay the same and 17% expecting them to decline. For the prior month, slightly more people, 34%, expected them to stay the same, with 33% stating prices would go up; 26% expected them to go down.

Regarding interest rate movements, 44% in the September survey expected them to stay the same over the next 12 months, compared with 45% in August. But fewer people expected further rate drops, 11% versus 17%, while the share that see rates rising grew to 38% from 33%.

When it comes to job security, 83% said they were not concerned about losing their job over the next 12 months, up from 78% in August.

Even though it is not calculated in the HPSI, the share of respondents that said they would buy if they were to change residences rose to a record high of 71% compared with 69% for both August and September 2019. Those that plan to rent fell to 24% from 26% one month ago and 27% one year ago.

But will those potential purchasers have a property to buy?

“Going forward, we believe the wild card to be whether enough sellers enter the market to continue to meet the strong home-buying demand,” Duncan said. “The home purchase market requires the proper mix of home price growth and continued economic recovery to achieve sustainable levels of housing activity.”